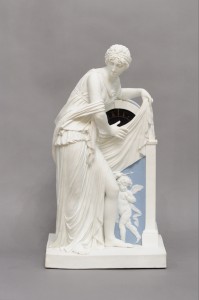 David Roche’s first purchase of porcelain was an unrelated pair of items -an English bone china statue of a Terrier and a figurine of Queen Marys’ pet dog.  He was just 13 years old and so began his passion for collecting, which continued at an unceasing pace until just weeks prior to his death on March 27th 2013.

In selecting items to display at the Roche Viewing Gallery for this exhibition, we have drawn heavily from the ceramics within the Collection.  Nature and man in porcelain and pottery of naturalistic representation remained a compelling force in David’s collecting.

With the development of a scientific perspective and the study of human and animal anatomy, a new chapter in Western art was initiated.  This was art employing the human form as an expression of ideal classical proportions.  Here, art shows the human form in its beauty of line, and with the indication of form through the use of light and shade, developing a whole repertoire of media.

Marble, ormolu, bronze, terracotta, timber and especially pottery and porcelain, as well as oil painting , are all used to portray the human form and all are represented here in this exhibition.

David Roche was fascinated by skeletal studies and the progression to studies of the muscular system.  From there to the nude model, and then the clothed form, the portrayal of the human form, is seen by many as God’s highest form of creation, to be treated with respect and dignity.

Over the years, he came to realise that his was indeed a great collection.  He was however, always humbled by other supreme collections in Australia, such as the stunning 1984 exhibition mounted by The National Gallery of Victoria “Flowers and Fables:  a survey of Chelsea porcelain 1745-69” curated by Ms Margaret Legge, The Nigel & Diana Morgan Collection of magnificent ceramics in Melbourne, and the Ken Reed Collection at the AGNSW, Sydney, as well as others.

David collected reference books and subscribed to magazines, domestic and international auction house catalogues (many arriving irritatingly after the auction!). The tyranny of distance combined with the postal system! Life, as some say, is not easy and then, out of the blue came the internet!  David did not embrace the use of computers, nevertheless, he became deeply devoted to hours side by side at the screen with his trusted P.A. Lorraine Felix, “surfing” the net for new and essential treasures to add to his collection.

The human form is well represented in Exhibition 6 and throughout the collection of the late David J K Roche.

The symbolic role of flowers in Western art from the late Renaissance through to contemporary Australian art is both significant and diverse. The Dutch still-life tradition is perhaps best-known, with its association between flowers and the transience of life, but there is much more to discover. Flowers: Passion. Pain. Nation. draws together the big narratives of life – religion, marriage and death, as well as love and eroticism. Flowers are also part of Australia’s national narrative in art and a crucial source for Australian modernist women.

For David Roche, flowers were a source of endless joy in his garden and home. He collected porcelain, furniture and textiles adorned with flowers and many still-life paintings over his lifetime. David’s purchase of Theude Grönland’s Still life with flowers, 1846, was amongst his very last. These are now complimented by major paintings from public and private collections and illustrate the universal appeal of flowers across the centuries in Western art.  Artists represented in Flowers: Passion. Pain. Nation. include Henri Fantin-Latour, Bartolomeo Passerotti, Tom Roberts, Hans Heysen, Margaret Preston, Adrian Feint, Arthur Boyd, Max Dupain, Anna Platten and Michael Zavros.